Havurat Yisrael started in 1981 by Rabbi David Algaze. His vision initiated the first outreach programs in Queens. Because of his warmth, hospitality and acceptance, the synagogue quickly became a haven for ecletic Jews. Havurat Yisrael succeeds in its mission of bringing together Jews from every background, profession, level of religious observance and culture. Havurat Yisrael is noted for the comraderie and friendships made among it’s congregants, the inspiration of its davening and the spirituality and festiveness of its programs and events. 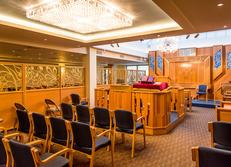 from The University of Buenos Aires. He holds a Master of

Philosophy degree from Columbia University, and a Master of
Hebrew Literature from the Jewish Theological Seminary.

Ethics, a Columbia University President’s Fellow and a Kent

Fellow of the Danforth Foundation.

Rabbi Algaze received his smicha from Rabbi Joseph Messas, Chief Rabbi of Haifa, Israel and from Rabbi Ezra Basry, head of the Beth-Din of Jerusalem. He is doctoral candidate in ancient history at Columbia University. Rabbi Algaze ‘s secular education combined with his Torah learning is what supports his special understanding of people and his rapport with his congregation.

To provide a synagogue in the central Queens
area that welcomes every Jew as one family
and celebrates and shares life’s milestones. To
encourage spirituality, connection to community
and love for Israel through prayer, learning
and involvement in the Torah experiences that
bind us together.